My essay seeks to explore the memory of the Second World War in Greece. To this end, it focuses on memory sites in order to reveal the way in which political elites have attempted to historicize the past and to construct a collective national memory. Here I conceptualize places of atrocities dedicated to the occupation period as topographies of pain and traumatic past, so as to stress their usage in the construction of collective memory or multiple memories and the difficulties that the study of Second World War memory entails.

Nowadays that Greece is struggling with a socio-economic crisis and its relation with Germany is at the centre of political and economic developments, the traumatic memory of the occupation is recalled. The ideological usage of the Second World War in Greek memory breeds both economic demands for compensation and populism. Anti-German feelings are intensified particularly at places of atrocities, and the occupation period memories are coming back. The retrieval of the occupation memory and the symbolic dimension of resistance are constantly used by political elites to meet present needs. And yet, in times of crisis, a well-researched understanding of the common history, by both countries is urgently needed.

After the end of the Second World War the countries involved had to formulate their recent history so as to come to terms with their traumatic past. Thus they acquired a common identity, that of the winner opposing a common enemy – Nazism – and skilfully concealed the civil strife and the divisive memories. In many cases, traumatic experiences and guilty pasts were silenced. In Greece, to take a typical case, the collective memory of the occupation, although tripartite, focuses on the atrocities of the Germans, and to a lesser extent on those of the Bulgarians and even less of the Italians. At the same time, civil strife during the occupation, the role of the Allied forces and collaboration were concealed until the 1990s.

In Greece, the memory of the occupation was constructed on the basis of a national narrative that the political elites weaved in order to cope with the past. During the early Cold War years, Greece and Germany found themselves on the same side of the fence ‒ against the Soviet Union. Thus they attempted to pass over the occupation. EAM-led resistance passed into oblivion and the left-wingers were depicted only as violent subverters of the political regime. During the right-wing rule, the atrocities of the Germans were overshadowed by the communists’ violence and their subversive attempt to seize power after Liberation. Later, during the dictatorship, the memory of the resistance was re-conceptualized as a communist threat scattering death, while the Security Battalion Forces1 were recognised as resistance fighters by a law remaining in effect until 1983. Between 1946 and 1949, the terms guerrilla warfare, dispute and agony were used instead of “civil war”.

Both the National and the EAM-led resistance were officially recognised in 1982 by the government of PASOK, and this process also led to national reconciliation. The speech of Prime Minister A. Papandreou stressed the equal contribution of all resistance organisations to the struggle against Nazism.2 The national memory of war concealed the hatred and conflicts of the civil war. The political elite constructed the memory of World War Two as a defence war waged by the totality of Greeks against Nazism. Due to the civil war, the Second World War had remained a taboo subject until the 1980s.3 Greece is the only European country that celebrates the beginning of the war and the “heroic NO (Ochi)” to the conquerors, and not the end of the war. Even today, history textbooks, although they contain chapters on civil war and the resistance, treat them in a fragmented and uncritical manner that obscures the political objectives of the resistance organisations. The divisive, controversial and dark side of history remains in oblivion.4 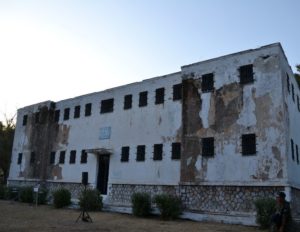 The first memory site to be discussed here is the Haidari concentration camp. The camp was built during the Metaxas dictatorship (1937) and was used as barracks. In autumn 1943 the camp was controlled by Italian forces, and from September 10, 1943 by the German SD (Sicherheitsdienst) and SS forces. The detainees were mainly communists and Jews from across Greece. The camp consisted of 20 blocks divided into several units. Haidari was mainly a transit camp for those about to be transported to concentration camps for extermination. The first major transportation of Jews to Auschwitz, of 1,900 persons, started from Haidari.5

The dreadful conditions at Block 15 where the condemned and the Jews were kept characterised the camp as a whole. The detainees were packed, usually lacking food, water and sanitation, and suffered violence from the guards. As a result, many died. Stories of physical and psychological violence are prominent in the survivors’ testimonies.6 The Germans used the notoriety of the camp as a means of intimidation of the resistance movement.  The monumentization of the camp took place after the recognition of National Resistance by the PASOK (Panhellenic Socialist Movement) government in 1982. In 1984, the local council declared Block 15 as a resistance monument under the aegis of the Ministry of Culture. The commemorative plaque reads: “ Block 15, 1943/44 – sacrifice and martyrdom site of the National Resistance fighters, starting point and barrack of the fight for the liberation of our people.” The inscription emphasises the united resistance of the Greeks according to the political imperatives of national reconciliation. The plaque mentions neither the communists nor the 4,468 Jews held there. 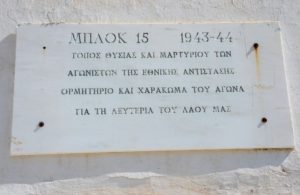 The inscription on the plaque skilfully avoids reference to the civil war and to collaborationism. On the other hand, the concealment of the subject of Jews as detainees is indicative of an exclusionary trend in Greek national history. In collective national memory, Haidari is emblematic of National Resistance. In our time Haidari hosts the national celebration of October 28, while there are also attempts for its transformation into a museum of National Resistance. In addition, after the recognition of National Resistance by the PASOK government in 1982, the Kokkinia Round-Up where more than 150 people were executed and the Kaisariani Rifle Range where the Germans executed more than 200 men were also recognised as memory sites.

The other important memory sites are villages and cities where retaliatory actions by the German forces play a considerable part in the study of local historical memory of the occupation era. The network of these places of atrocities constitutes a topography of terror.7 A number of places in Greece suffered the German atrocities under the pretext of retaliation in a proportion of one to ten.8

The first one was Kandanos after the battle of Crete (20 May 1941). On 3 June 1941, Nazi forces burned Kandanos to the ground and executed 180 civilians. To legitimise their act, Germans put up signs in Greek and German that read: 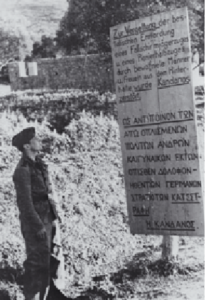 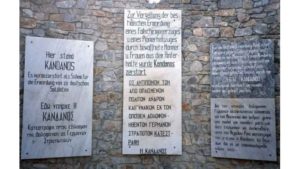 Nowadays Kandanos is a memory site; there are three signs with the same inscriptions written by the Germans, and the site hosts ceremonies to commemorate the victims. At the same time, it constitutes a terrain for the memory war that revolves around the causes and pretexts of the traumatic event, the role of the guerrillas and the historicization and monumentization of the past.10

Kalavryta constitutes yet another memory site of German retaliation where the political usage of memory, memory divisions and the conflict between the national and the local memory can be traced.11 The village of Kalavryta was considered as an ELAS guerrilla territory; therefore it was targeted by the Germans. ELAS guerrilla fighters captured 81 German soldiers and executed 78 of them. In retaliation, the German forces gathered the men of the village at Kappi hill, executed them and then burned the whole village.12 During the early Cold War era and within the framework of denazification in West Germany, there was an attempt to restore relations between the two countries. The German side offered scholarships to the youth of Kalavryta. Since then the memory of the event has been divided between the national official memory, which emphasises the heroic sacrifice of those that died as victims of Nazism, and the local unofficial memory, which emphasises the trauma and the causes of retaliation. As a result, an anti-guerrilla memory emerges from a section of the local community claiming that guerrilla actions had triggered the retaliation.

It was not until 1959 that the first actions to erect a monument for the Kalavryta Massacre were taken. However, since the concern of both governments was to build even closer relations, its construction was delayed and eventually the unveiling of the monument took place in 1964 on the occasion of the annual memorial service for the victims.13

The climate of conflict during anniversaries is very much alive even today among the local community, the party representatives, the victims’ organisations and the German ambassador. The first visit of the ambassador to Kalavryta took place in 2000, 50 years after the massacre. 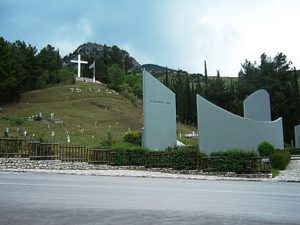 Also, in 2005 the Directorate of Protection and Restoration of Modern and Contemporary Monuments of the Greek Ministry of Culture founded the Museum of The Kalavryta Holocaust with funds from the Third Community Support Framework. Even at the Museum, however, the elaboration of the causes that led to the Kalavryta Massacre is found wanting, while any reference to retaliation as one of the key causes of the event is missing.14 Oblivion and reconciliation were prioritized over objectivity.

The historicization of the Kalavryta Massacre is indicative of the variety of divisive memories and the diversity of the conceptualizations of the past, depending on national political developments and international diplomatic relations.15 The commemoration of these events constitutes a field for historical research that could shed light on Second World War memory.

Finally, the belated historicization and monumentization of Shoah in Greece need to be stressed. At the first academic conference on the 1940s that took place in 1984, this thematic area was excluded.16 It was only in the 1990s, and contrary to the experience of other European countries, that the Greek Jews and their Holocaust were included in the national narrative. The delay can be attributed to the difficulty of the Greek authorities to include the Shoah in Greek contemporary history and, ultimately, to the acceptance of cultural alterity.

In 1941, the Jewish population in Greece numbered more than 70,000 people, 50,000 of whom lived in Thessaloniki, the second largest city of the country. Between March 15 and August 1943, 96% of the Jewish community was deported to Auschwitz.17 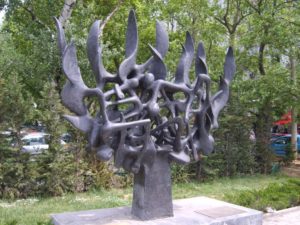 The monument depicts the seven candled menorah and flames all entangled in a mesh of human bodies. It was unveiled by the President of Greece in 1997 in the presence of representatives of the Greek government, government officials from Germany, Israel and the United States, which is indicative of the political and diplomatic mobilisation involved in the performance of historical memory. The speech by the Greek Minister of Culture implied the inclusion of Shoah in the Greek narrative.19 Also publicized through the press, it assigned historical significance to the construction of the monument. The delay, the retractions and the mobilization of diplomatic circles indicate the existence of a memory full of conflicts and the difficulties involved in the inclusion of Jews to the national narrative.

To summarize, the historicization of the German occupation is a difficult project in Greece, as the engagement with the past reveals the existence of traumatic and repressed memories. The divided memories and the divergence between personal and collective memory are rooted in the deep traumas that the civil war has left on the people and the political usage of memory by the political elites.